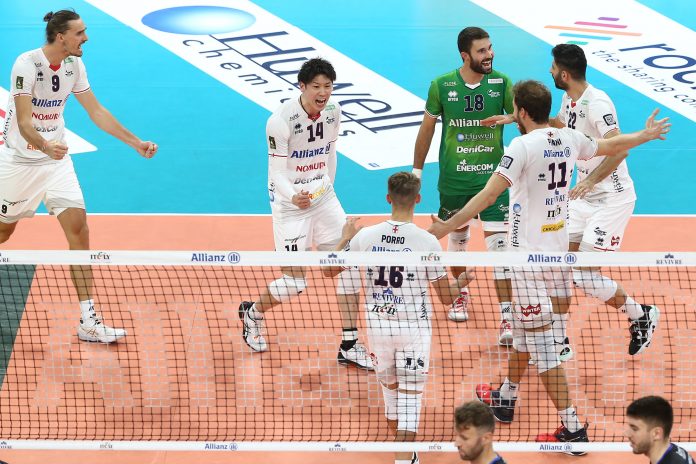 SuperLega Credem Banca finally opened. If a good day starts in the morning, in the Regular Season 2022/23 there will be uncertain comparisons and great matches. The 2nd round, scheduled for Saturday 8 and Sunday 9 October, offers two regional derbies (Monza – Milan, Piacenza – Modena and Verona – Trento).

Saturday 8 October, at 6.00 pm, the spotlights of the Monza Arena will turn on again for the Lombard derby with RAI Sport live between Vero Volley Monza and Allianz Milano, two big disappointments in the first round. The Brianza want to redeem themselves within the friendly walls after the clear defeat in Perugia, despite the good performance of Petar Visic’s setter to replace the unavailable Brazilian Fernando “Cachopa” Kreling, stopped due to a knee injury. It did not go better for the Milanese, defeated with the maximum gap at home by Cisterna despite the basic balance of the first and third sets, and eager to get up again in the demanding test against the two ex, Gianluca Galassi and Stephen Maar (chasing the ‘ace n.100 in SuperLega).

The second advance on Saturday, at 8.30 pm in the setting of the PalaOlimpia in Verona, is the 43rd derby of the Adige between WithU Verona and Itas Trentino, which they won on their seasonal debut. The Veneto team has conquered the PalaBanca of Piacenza showing a great push on the band and maintaining an enviable lucidity even in the most delicate moments. A great protagonist of the Scala past, Matey Kaziyski, returns to Verona as a rival, while Trento faces both the former yellow-blue flag Raphael Vieira De Oliveira and Lorenzo Cortesia, up until two years ago on the roster coached by Angelo Lorenzetti.

In the early Sunday at 16.00 the Top Volley Cisterna wants will face Gioiella Prisma Taranto, a team still at zero points in the standings, but which in the first official match of the tournament was able to frighten the Italian champions of Civitanova, then victorious at distance in all three set without ever taking off.

After the welcome back in the category, served by Trento at the BLM Group Arena, the rookie Emma Villas Aubay Siena tries again to grab a win on the home turf, facing powerhouse Sir Safety Susa Perugia at PalaEstra with the aim of repeating the test that yielded the 3 flash points at home with Monza.

The last official match of 2021/22 at the Eurosuole Forum had been staged in prime time for the third title in a row for Cucine Lube Civitanova, which on Sunday, at 20.30, will face Padova Volleyball. The agonistic wickedness of Padova and the 14 walls that blocked the way to the Modenese offensives laid the foundations for the 2 points snatched against a big one.

At 8.30 pm on Sunday, PalaPanini will separate the great ambitions of two teams who lost at their seasonal debut in SuperLega Credem Banca. The RAI Sport cameras are ready to cover the tenth Emilian derby between Valsa Group Modena and Gas Sales Bluenergy Piacenza. The hosts, ahead with 6 wins to 3 in the previous budget, come from the tie break defeat against Padua at the Kioene Arena, while the Piacentini, who fell at home to the last breath against Verona, during the week were rejected by the sports judge the appeal for an alleged irregularity on the occasion of the potential victory point denied by the referees after consulting the Video Check. Yoandy Leal returns to Modena as a rival for the first time, Adis Lagumdzija and Dragan Stankovic receive a visit from the club where they played for a season.

The Serie A2 Credem Barca returns to ignite the Italian sports halls with the advance of Saturday 8 October between Prata di Pordenone and Porto Viro, a match followed the next day by another six matches scheduled simultaneously at 6pm. Debut for the freshman Tinet Prata di Pordenone.
The newly promoted Videx Yuasa Grottazzolina celebrates the return to A2 on their own court. After losing in the sprint the Del Monte® Coppa Italia of A3, but thanks to the victory in the Play Offs of A3 and in the Del Monte® Supercoppa of the category, the Marche team, with Breuning Nielsen 2 points from 1700, dreams of a good impact, but Sunday awaits the BCC Castellana Grotte.
Lombard Derby on the 1st round: Pool Libertas Cantù and Agnelli Tipiesse Bergamo take their first steps in the season with the sixteenth act of a challenge so far lacking in satisfactions for the Canturino team, victorious only 3 times, but willing to redeem the tenth place of last season. Bergamo arrives at PalaFrancescucci, winner of the past Regular Season and of the Del Monte® Supercoppa of Serie A2 for the second year in a row.
Tonno Callipo Calabria Vibo Valentia arrives at PalaSport Villa d’Agri in Marsicovetere, Cave del Sole Lagonegro, relegated to A2 against all odds after a season marked by injuries and complex situations.
Eliminated in quarter-finals of 2021/22 PlayOffs with a very high head after two spectacular marathons with Cuneo, then finalist of the promotion play-offs, HRK Motta di Livenza,
If in 2020/21 the Consoli McDonald’s Brescia had become the protagonist of a fairy tale that ended only in the Play Off final series, in 2021/22 it was the turn of BAM Acqua S. Bernardo Cuneo to dream up to the last step, only to wake up abruptly in the showdown with Reggio Emilia, former protagonist of the final act of Del Monte® Coppa Italia Serie A2. The two teams want to start on the right step. In particular, the Tucans want to assert themselves against an ex, the central Codarin, and exorcise their black beast BAM, never beaten in the previous 5.
After a complicated season in SuperLega Credem Banca which ended with an early relegation, Consar RCM Ravenna restarts with great ambitions and a young project from Serie A2 and, fresh from the training test with Vibo, immediately finds an uncomfortable client like Kemas Lamipel Santa Croce.

Serie A3 Credem Banca is upcoming: 28 teams have entered, into two groups of 14 teams. The opening of the 2022/23 season is in Girone Blu scheduled at 6 pm on Saturday 9 October between Rome and Ortona. The other 13 meetings will be scheduled the following day.

White Group
First game of the Girone Bianco in Umbria with the 16.00 challenge on Sunday 9 October between ErmGroup San Giustino, which took over the title of the newly promoted Letojanni, and Med Store Tunit Macerata. At 18.00 home debut for WiMORE Parma, who acquired the title of the relegated Mondovì, against Moyashi Garlasco. At the same time the Emilian derby between Geetit Bologna and the newly promoted Stadium Volleyball Mirandola takes place, but the Venetian derby between Volley Team San Donà di Piave and Da Rold Logistics Belluno is also played. At the same time Vigilar Fano and Abba Pineto find themselves facing each other. At 19.00 the round ends with two games: Gamma Chimica Brugherio hosts the Monge-Gerbaudo Savigliano, while in Veneto will take place the derby between Sol Lucernari Montecchio Maggiore and TMB Monselice, a club that has risen from Serie B.

Group Blue
Sieco Service Ortona inaugurates the new year of the Girone Blu on Saturday 8 October, at 6.00 pm, away against SMI Rome, registered in the category thanks to the acquisition of the title of Ottaviano. Four matches are scheduled at 6.00 pm the following day, Sunday 9 October: the Wow Green House Aversa hosts the Caserta derby with Volley Marcianise, the Maury’s Com Cavi Tuscania gives life to the Lazio derby with the SSD Sabaudia, the newly promoted QuantWare Napoli competes in derby with Shedirpharma Sorrento, while OmiFer Palmi debuts at home in the “derby of the south” with M2G Green Gruppo Stamplast Bari, on his debut after climbing up to Serie A volleyball. The calendar proposes the last two appointments at 19.00 of the day: the Salento derby between Aurispa Libellula Lecce and Leo Shoes Casarano, but also the Sicilian one between Avimecc Modica and Farmitalia Catania.

Live Radio “Domenica Sport” – Radio RAI from 18.00
On Sunday 9 October, the 78th Credem Banca SuperLega Championship will be the protagonist on RAI Radio 1, with live updates from the fields, within the “Domenica Sport” program.
Live radio “Set & Note” on LatteMiele and LatteMiele.com Sunday at 6.00 pm
Marco Caronna’s radio raids on the fields of the SuperLega Credem Banca Championship are back. The conductor within the “Set & Note” program will follow the progress of the Sunday challenges of SuperLega Credem Banca live. “Set & Note” is also on the web live streaming on www.lattemiele.com or by clicking on the LatteMiele box on the homepage of www.legavolley.it.

Foreign Countries
The TV partners of the Serie A Volleyball League abroad will broadcast the matches from Monza (Saturday) and Modena (Sunday): Sportklub (Serbia, Kosovo, Croatia, Bosnia Herzegovina, Slovenia, Macedonia, Montenegro), Polsat (Poland), TBS and FUJI TV (Japan), Jaran (Turkey), ESPN Latam (Central / South America and the Caribbean), and Volleyball TV worldwide as well as the main world betting sites served by the IMG Arena agency. The Polish broadcaster Polsat also broadcasts all Sir Safety Conad Perugia matches.
TG5 and Sport Mediaset
Canale 5 by night TG5 will offer a service on the SuperLega Credem Banca weekend with highlights and commentary on the matches. The same service will be broadcast in multiple passages in Sport Mediaset news, broadcast from 24.00 to 8.00. Space for a summary of the day also in the 13.00 edition on Monday in the sports news.
SKY Sport 24
Sky Sport 24 will take care of in-depth information on the matches of the Credem Banca SuperLega Championship, taking stock of the games played, with images and interviews with the protagonists.
“After Hours” – the SuperLeague at night
(#AfterHoursSuperLega) “After Hours, the SuperLega at night” live with Andrea Zorzi and Andrea Brogioni, now in its third season, continues to offer many guests from the world of volleyball, every Sunday from 21.30 on the facebook page and on the YouTube channel of Serie A Volleyball League. To enrich the season there will also be the midweek column “Poisoned ball”, the Wednesday study on the SuperLega Credem Banca weekend. 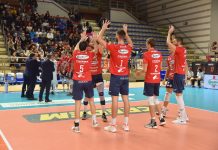 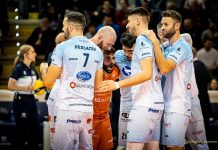 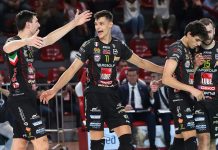