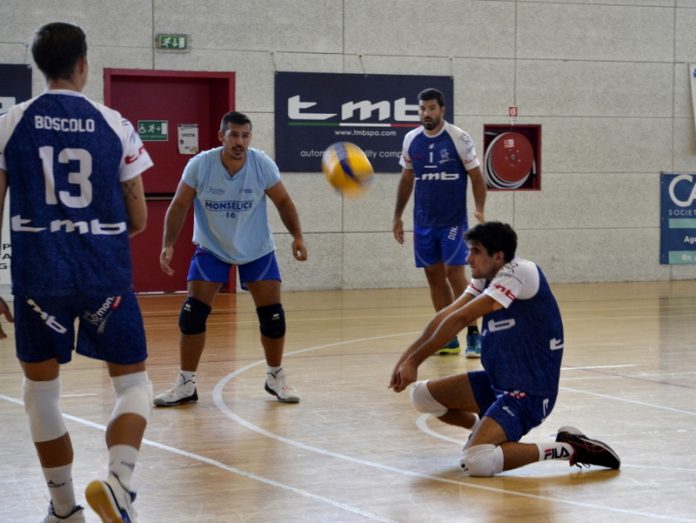 Winning friendly match for Tmb Monselice which hosted San Donà, a sextet that will also be an opponent in the A3 Credem Banca series. A 3-1 for Cicorella’s boys, pleasant for the crowd despite the friendly match and where the teams faced each other without hiding too much even if, it must be said, the men available to coach Tofoli were almost counted given the unavailability of Delmonte and Mandilaris . In the end, whoever wins plays better in attack and here is 32% of effectiveness in attack for Monselice against 21 of the Venetians, who already appeared in league form in reception (63% against 44% of the Tmb). The departure is entirely of Monselice (3-0) who accuses some difficulties in attack (6-7) and then immediately recovered (11-9 17-14) with Tofoli to stop the game. Reception of the Paduans who yields and is immediately 18-17 and later 23-23 with the uncertain final set put in line by Umek (22-25). Two aces from Borgato start the second fraction (4-1) but still the reception does not favor the comeback and overtaking (6-6 7-9). Some errors in the attack of the San Donà (12-11) which slows down by the Venetian wall in command (14-16). Here ends the guest advantage as the determination and the few errors of the Tmb are the extra weapons for the comeback (21-20) which is completed with the wall of De Santi (25-22). Third set San Donà starts well (3-6) but Monselice doesn’t stop (8-7 13-11). From here on, the changes in Monselice begin which do not distort the substance (16-13) with Tofoli who stops everyone at 20-16 but Bacchin does not forgive for the final 25-22. Fourth set still room for everyone with San Donà slightly ahead (5-6) but the hosts’ response for the provisional 12-10 is ready. Provisional since in the blink of an eye you go on 12-14. Even in the blink of an eye, Monselice overturns the situation (19-17) waiting for the evening finale (25-22).