In the Italian Volleyball League assembly on today in Bologna, the Clubs listened to President Paola De Micheli, who gave them some important news.
First of all the new deal with Italian National TV Rai Sport, for a three years contract for official broadcasters of Superleague.

Then the assembly approved the new way of calendars and tournaments, agreeing with the Italian Volleyball Federation, in next 2018/2019 Superleague season there will be 15 teams, with 3 relegations and 1 team coming from Serie A2.
The target is to have 12 Superleague teams in 2020/2021, with Serie A2 which will be of composed by 28 teams, looking forward 2019/20 season, where Serie A2 will be devided in two leagues.
So some important news for the Clubs, in the top league in the world.
Volleyball transfer market will take place next 17th, 18th, 19th july at FICO in Bologna.

Change time in the Superleague schedule 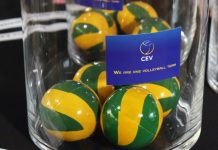