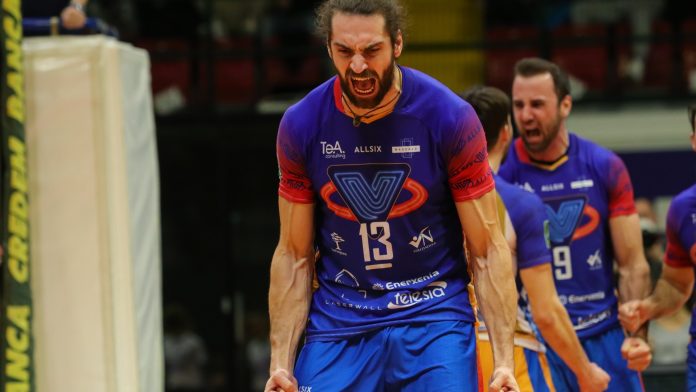 Thomas Beretta will be a Vero Volley Monza player also in the 2022-2023 season. The captain of the first men’s team of Monza in the last four seasons, class of 90, rock wall, one of his best fundamentals, will also be at the center of the Rossoblù team the next SuperLega Credem Banca.

Beretta’s numbers in the recently concluded sporting year are extremely positive. The number 13 from Brianza, in fact, scored, in 41 appearances, between the Championship, Play-Off Scudetto, Play-Off 5th place, Del Monte® Coppa Italia, Del Monte ® Supercoppa and CEV Cup, and 128 disputed sets, 191 points, 60.3% in attack, 6 aces and 62 blocks. Beretta, also poisonous from nine meters and useful in facilitating the break phase of his team, was also awarded once as MVP: Monza vs Cisterna, 7th return day.

CAREER AT A GLANCE
Beretta’s career began in the youth academy of Volley Treviso in 2007. In the 2009-2010 season, in addition to collecting some calls for the first team, he was also part of the Italian junior national team. After playing a season with Top Team Volley Mantova in Serie A2, in the 2011-2012 season he moved to Che Banca Milano (Consorzio Vero Volley) for two seasons. His performances with the Monza team in A2 allowed him to snatch a call-up to the senior national team, with which he won the bronze medal at the World League and the Grand Championship Cup and the silver medal, again in 2013, at the European Championship. After playing with Modena in the 2013-2014 season, Beretta moved to Perugia in 2014-2015 and then returned to the Consorzio Vero Volley again in the 2015-2016 one. With the flagship men’s team of the Brianza reality he won a Final of the Play Off Challenge in 2017-2018 against Padua, arriving in the Final of the Challenge Cup 2019 (defeated by Belgorod). In 2020-2021 he obtained the fourth place in the regular season (Monza’s best result in the SuperLega), qualifying for the Final Four of the Italian Super Cup 2021 (defeat in the Final against Trento after the 3-1 victory over Civitanova in the Semifinal). Also in 2021-2022 he won the first European trophy in Monza in the men’s sector, raising the CEV Cup 2022 thanks to the double victory in the Final over the French of Tours.