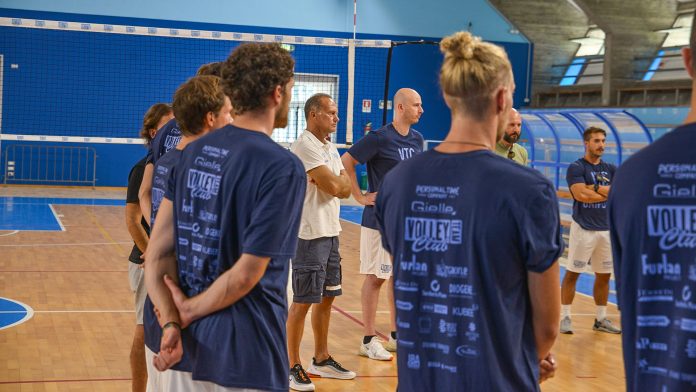 Under the eyes of the management who, as usual, welcomed the boys and set the goals and ambitions of the year, the group started working in the gym, assisted by the new athletic trainer Alberto Antonelli, and then ended up on the pitch. starting to regain confidence with the ball.

Commitment, dedication and spirit of sacrifice are the key words that Mister Tofoli wanted to underline and that the whole team will have to make their own along the way: “I married the Volley Team Club project last year and this year we wanted to give continuity by renewing the team of players who had reached seventh place and the play-offs. The goal is to always try to improve but above all to create a united group based on desire and work spirit. We have big goals in the technical area with some players in their first professional A3 experience who have the ambition to prove their worth on the pitch. I am sure that everyone will work to create a close-knit and winning group. ”

In the meantime, the joint training sessions that will see the Volley Team Club approaching the first championship match have been defined. On 17 September we will be guests of Monselice Volley, while on 21 September we will play a match in Belluno that will be an appetizer of the first match of the season (on 9 October, at home); then, at PalaBarbazza, on 25 September, the VTC will face Motta di Livenza, a team that plays in Serie A2 and on 29 September we will fly to Montecchio. The last joint training session will always be against Motta (date to be defined).

In short, a little less than two months before the official start, the boys will have plenty of time to get to know each other and allow the new ones to mix well, starting to focus first of all on the athletic part and then move on to the field.