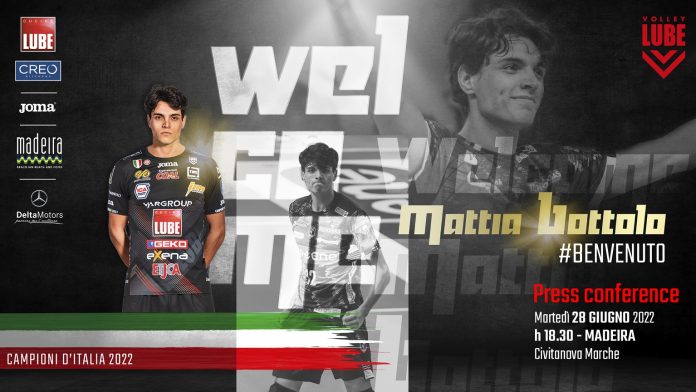 Double event in red and white shades on Tuesday 28 June at the Madeira Brazilian Beach and Food chalet restaurant on the southern seafront of Civitanova Marche.

The Venetian spiker Mattia Bottolo will be available to the press and fans from 18.30. Then, around 8.15 pm, the “Blue Night of the Lube” will take place. The central Simone Anzani and the free Fabio Balaso, companions of the new chef in the European champion national team and in the Italian champion Cucine Lube Civitanova, will join him to have dinner with the fans.

At the opening conference all the spotlights will be on Bottolo, the first of the additions announced in recent weeks by the Club. The former Kioene Padova, now in the Philippines with Anzani and Balaso for the second week of the VNL, will therefore find the two companions in Madeira . Two other Lube national teams will be absent, the opposite Ivan Zaytsev, in retreat at the Acqua Acetosa Olympic Preparation Center in Rome in view of the next matches with Italy, and the spiker Mattia Gottardo, emerging from Padua, now at taken with the team of the blue selection U22 in view of the European category.

The conference will go live on Arancia Television (digital terrestrial channel 98) and live streaming on the social networks of Radio Arancia and Lube Volley.

After the presentation, the “Blue Night of the Lube” will open with the three European champions at the table among the fans at Madeira. The convivial evening will have a special price for Cucine Lube supporters.