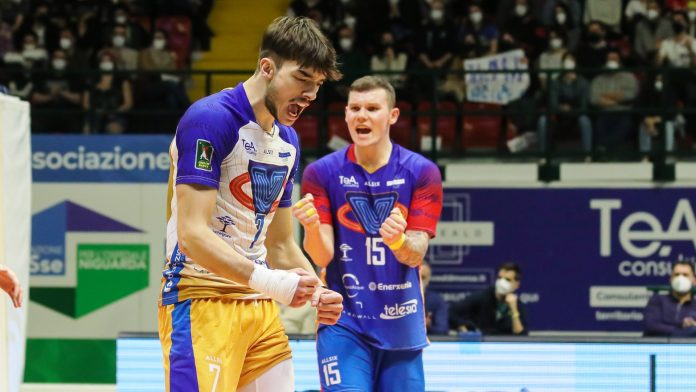 Filippo Federici will be a Vero Volley Monza player also in the 2022-2023 season. The free man of the first men’s team of Monza in the last three seasons, born in 2000, among the best prospects in his role at national level, will continue to defend the second line of the rossoblù team in the next SuperLega Credem Banca.

Federici’s numbers in the sporting year just ended speak of 40 appearances, 128 sets played, including the Championship, Play-Off Scudetto, Play-Off 5th place, Del Monte® Coppa Italia, Del Monte® Supercoppa and CEV Cup, and 22.6% of perfect reception. The talented athlete born in Ancona, precise in reception and solid in defense, was the protagonist of excellent performances between Italy and Europe.

CAREER AT A GLANCE
Filippo Federici grew up in the Volley Game Falconara, a company with which he played until the Under 14 (2014), subsequently joining the federal team of the Aeronautica Militare Club Italia, with whom he played in the B2 championship in 2014/2015. In 2015/2016 he played Serie B with the Azzurri team, arriving in Serie A2 in the 2017/2018 sporting year and up to 2019. From the 2019/2020 season he is an athlete of the Vero Volley Monza, a team with which he emerges decisively thanks to super performances. After having played as a starter throughout the 2020/2021 season, Federici confirmed his talent also in the one just ended, made special by winning the CEV Cup in the Final against the French team of Tours.

IN NATIONAL
With the youth national team jersey, Federici played in all competitions from the Under 17s to 19, winning gold in 2017 at the European Youth Olympics. In 2021 he obtained the first calls for some collegiate teams with the National Seniores, representative with which he competed in the VNL 2021 of Rimini and of which he still belongs.