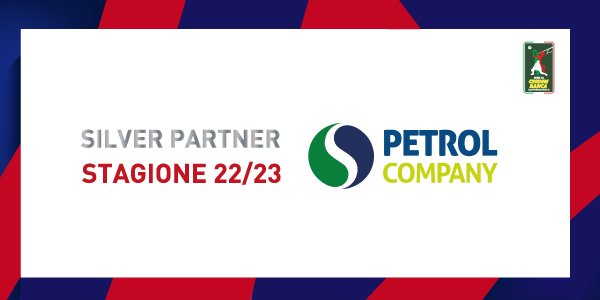 Petrol Company S.r.l. is the new silver sponsor of Farmitalia Saturnia. The Sicilian company that deals with the marketing of petroleum products and lpg transport, with a network of service stations between Eastern Sicily and Calabria, has chosen to embrace the values ​​of sport and to support Sicilian training along its path for the Serie A3 Credem Banca 2022/23 Championship.

“We were invited by the president Luigi Pulvirenti to watch the last matches of last season and there was a spark. – explains Loris Scandura representing the company – It was the sporting aspect, as well as the human one, that made us take that step plus. We really enjoyed seeing the determination on the pitch and feeling the great involvement of the public. ”

The Petrol Company is one of the most historic companies registered with the Catania Chamber of Commerce, but until a few years ago it worked behind the scenes using the brands of the main oil companies (ESSO / ENI / IP) at its points of sale. Recently a rebranding action and the choice to bet on the territory by investing both in service stations, but also in No Oil activities, to bet on the Sicilian territory: “We strongly believe in the possibilities of our island and, as regards the our choice to be part of this project, it is not just about financial support, but it is about the desire to follow the team closely. Our commitment will be not only to raise awareness of those who work with us, but also to par – to talk with fellow entrepreneurs to convince them to be part of this game “.