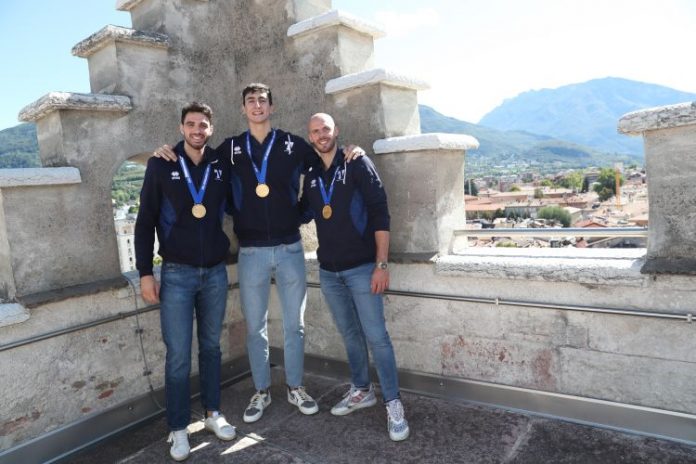 Trentino Volley, Trento and the entire province have today embraced the World Champions again. A little more than a week after the Katowice Final which gave them the 2022 world title with the Italy shirt, Daniele Lavia, Alessandro Michieletto and Riccardo Sbertoli have in fact returned to the city to join the Itas Trentino group and start preparation for the debut in SuperLega Credem Banca 2022/23.
Before attending the afternoon training session of their Gialloblù season at the BLM Group Arena, the three players were received in the morning at the Palazzo della Provincia by the Governor of Trentino Maurizio Fugatti and by the Councilor for Sport Roberto Failoni and then at the Palazzo Geremia by the Mayor Franco Ianeselli. In this way the authorities wanted to thank the three Trentino Volley athletes for the great result obtained, delivering them official awards and reiterating the great pride of the territory for the historic victory. In addition to the institutional moments, there was also room for a very welcome unscheduled event; at the end of the meeting in the Municipality, the Mayor wanted to personally accompany the three champions to the top of the Civic Tower (which has always been the symbol of Trento) to be able to admire the city from above with them.
“From the roof of the world I took you to the roof of Trento – explained Mayor Franco Ianeselli to the Gialloblù players -; allow me to offer a heartfelt thanks on behalf of the city. While we were following the final from home, we were struck by your expressions: our faces were twisted by tension, you were incredibly serene. You have given us a lesson on how to cope with difficult situations. This recognition is for you and for all of Trentino Volley, because today we can say that the volleyball played in Trento is the best in the world ”.
“The message that Sbertoli, Lavia and Michieletto managed to give to Trentino and to many young people, offering them one more reason to get closer to sport and in particular to volleyball, is very important – the Provincial President Maurizio Fugatti had previously emphasized -. The international results are proof of an Italy and a Trentino that does well in all disciplines and the crowning glory of the efforts of a club like Trentino volley to help the youth movement grow “.
For their part, the three new World Champions were almost amazed by so much attention, a clear sign of how they still have to realize the extent of their result. 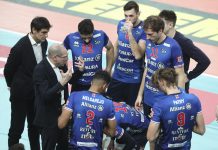 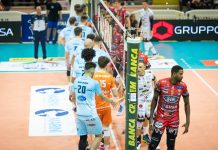 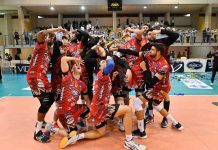